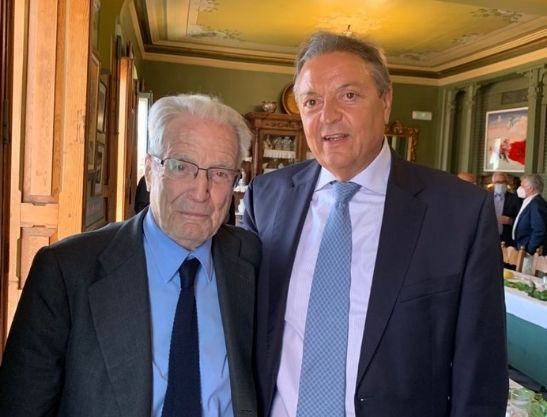 24/06/2021
The Segovian Business Federation (FES) organised a business meeting at its headquarters with Antonio Garrigues Walker, one of the most prestigious lawyers in our country and honorary president of the Garrigues law firm, who gave a speech on “How to look to the future”.

Before an audience made up of thirty business people from the province, from different activity sectors, Garrigues Walker encouraged them to look beyond borders and to “believe that you can be successful abroad, that you can do three or four times the business you are doing now”.

Garrigues was introduced by the president of FES, Andrés Ortega, who referred to the speaker as “a point of reference” at an especially difficult time, with the pandemic and with “a lot of work ahead to consolidate the reactivation that has begun”.

During the speech, which quickly led to the exchange of ideas with the businesspeople, president Carlos Tejedor was seen alongside Don Antonio Garrigues.

More information about this meeting here.

Any cookies that may not be particularly necessary for the website to function and is used specifically to collect user personal data via analytics, ads, other embedded contents are termed as non-necessary cookies. It is mandatory to procure user consent prior to running these cookies on your website.